On Tuesday morning, the girls on the team—Theresa, Cydney, and I—went to Oron to minister at a women’s ministry meeting called Ladies First. During the ministry time, Theresa put me in charge of the prophetic singing booth. I ended up singing prophetically over 10-15 ladies, one after another. Cydney asked me later if I was tired from singing so much. I answered, “No. It blesses me to bless other people.” Each woman seemed so impacted and encouraged by the prophetic song.

Through this experience, I realized all the more just how powerful music is, because music doesn’t just land in the mind; it cuts straight to the heart. I can say and pray the exact same words, but when sung, they carry so much more weight and anointing. I’ve become a firm believer of this.

Even after retuning from this trip, this past Sunday at service, I sang over someone in the ministry line. Then on Monday night, my home group leaders asked me to sing prophetically over two people who had knee pain. Both times, people said that they could feel the peace and presence of God. I feel like it’s become a part of me now, a tool that that I can reach for any time I want, because I exercised it so much during this ministry trip. Praise God for opportunities to be stretched!

That night we had a creative seminar at Eglise Evangélique Apostolique d’Aubonne, Cindy Sauvain’s church in Aubonne. I painted during worship for the first time on this trip. The picture I saw was that of a Bride wearing a white dress with a blue bow that represented Purity & the Glory of God. Fire was all around her, purifying and refining her until she was completely spotless and pure. “Let us rejoice and be glad and give him glory! For the wedding of the Lamb has come, and his bride has made herself ready” (Revelation 19:7).

After worship, I gave the painting, along with the interpretation, to a lady that God highlighted to me. She was very moved by the painting and said that it represented her life completely. 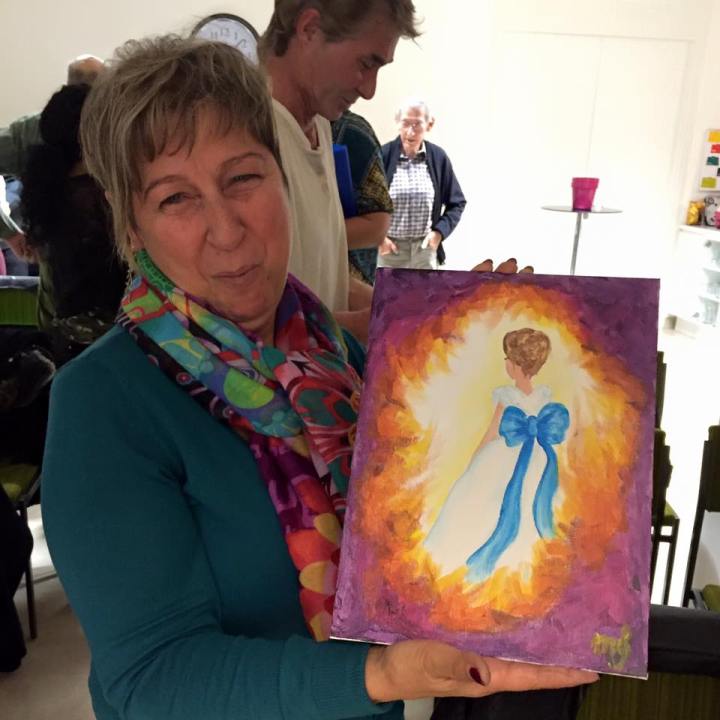 In the middle of her creativity sermon, Theresa asked me to demonstrate prophetic singing over someone from the congregation. I saw a lady with her head down, and it didn’t seem like she was very engaged with what was going on. Nevertheless, I felt God highlighting her, so I picked her. When she came up, I started singing over her, “The joy of the Lord is your strength. He wants to give you joy…” Tears began streaming down her cheeks.

After I was done, Theresa asked her, “What did it mean to you?” She said, “It made me feel so special.” Then I realized, the power of song is not only in the melody and words, but also in the significance of being sung to. It’s about being seen and known, loved and accepted, which makes all the difference.